Road and Park Project Benefits Abt and the Community, accommodating delivery trucks and adding parking at popular Glenview park 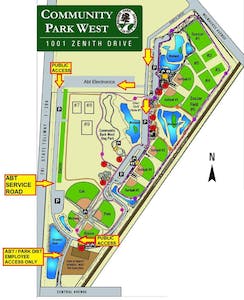 Glenview-based Abt Electronics has partnered with the Glenview Park District to make road and park improvements that enhance the retailer’s access to its soon-to-be-expanded showroom and warehouse, while adding parking at Community Park West and making other upgrades that benefit park users.

Abt, the country’s largest independently-owned, single-location retailer of electronics, appliances and home goods, constructed an access road off of Central Avenue in Glenview to accommodate increased truck deliveries and traffic resulting from the expansion that is currently underway. The new road, which is within the park, gives Abt’s trucks easy access to the expanded warehouse, cutting three to five minutes off of the time it takes to use the main entrance on Milwaukee Avenue.

To isolate the road from the sports fields in Community Park West, Abt relocated a eight-foot berm with plantings. The retailer also paved a gravel lot in the park, added 150 parking spaces, enhanced stormwater retention and expanded the park’s main road so it no longer dead ends but circles through the property, exiting back onto Milwaukee.

“This project is important for Abt and our customers, as we prepare to utilize our 430,000-square-foot expansion,” says Jon Abt, co-president of the retailer. “We are also pleased that the project benefits the community by enhancing the park that is our next-door neighbor.”

“We thank Abt for its partnership on these improvements that make Community Park West even more accessible to our community members and the many Chicago-area residents who utilize the baseball and soccer fields, playgrounds, walking path and other park features,” says Michael McCarty, Glenview Park District Executive Director.

The Abt-funded project, which cost $1.6 million, started last spring and was completed in October. The new Abt access road is scheduled to open to the retailer’s trucks when the expansion is completed in January.

About Abt Electronics
Abt Electronics was founded in 1936 when Jewel Abt loaned her husband Dave $800 to open a small electronics store in the Logan Square neighborhood of Chicago. Abt has grown to become the largest independent, single-store retailer of electronics, appliances and home goods in the country. This third-generation family-run business (now run by Dave and Jewel’s four grandchildren, Mike, Ricky, Jon and Billy, who share the title of co-president) is known for its award-winning customer service from its team of more than 1,700 expert staff members. Its Glenview, Ill.-based location boasts a 114,000 square-foot showroom on 37 acres. The entire facility, including its continually expanding state-of-the-art warehouse, totals over 450,000 square feet. The company has been recognized by the Chicago Tribune as one of the Top Large Workplaces in Chicago for ten consecutive years, taking the No. 1 position in 2016, 2012 and 2011. Abt has become an influencer on a national scale thanks to its thriving national ecommerce website where customers can receive advice and customer support through the site’s live chat feature, email and toll-free phone number. Abt is known for being an eco-friendly business and has an award-winning green program that includes LED lights, a rooftop solar array, an irrigation system that uses renewable rainwater, and a generator that provides electricity for nine hours of the day. Abt also has an on-premises 30,000-square-foot recycling center that takes in over 8,500 tons of waste per year including 95 percent of the company’s own waste. In the center of the showroom is a beautiful atrium where customers gain access to its many boutique stores-within-a-store such as an Apple Boutique and a Tumi Store. For more information, visit www.Abt.com.