Accredited Arboretum through the Morton Arboretum

In 1836, visionary horticulturist and educator Dr. John Kennicott settled on the property from New Orleans. His son, Robert Kennicott, became a prominent early naturalist and kept part of his plant and animal specimen collection at The Grove. Robert Kennicott also founded the Chicago Academy of Sciences.

In 1976, The Grove was designated a National Historic Landmark by the U.S. Department of the Interior. It is on the National Registry of Historic Places and is a partner of the U.S. Fish and Wildlife Service and Chicago Wilderness.

Experience Glenview’s most unique outdoor history and nature museum at The Grove. Venture on trails through the oak-hickory savanna, past wetland pools, and stop to watch a family of turtles. Learn about the Native American tribes and pioneer settlers who lived on this land and the tremendous impact they had on our community.

see more videos about the grove

Saving the Grove
Who were the Kennicotts?
Living Laboratory

The property that is now known as The Grove National Historic Landmark was once owned by the Kennicott family. Dr. John Kennicott brought his family here from New Orleans in 1836. They first lived in a log cabin before building the Kennicott House in 1856. Kennicott’s son Robert became a pioneer naturalist and explorer.

By 1973, the land and remaining buildings were slated to become a large development of high-density residential units. To prevent this, a group of dedicated individuals, formed the Save The Grove Committee to ensure the historical significance of the land was not forgotten. Affectionately known as the “Frog and Fern Ladies,” the Committee played a vital role in preserving this important historic site, and in 1973, The Grove was named to the National Register of Historic Places.

In 1976, the Save The Grove Committee became the Grove Heritage Association, the same year the land was designated a National Historic Landmark. Since then, GHA has donated thousands of volunteer hours and raised hundreds of thousands of dollars to benefit The Grove.

In 1995, an additional 41 available acres at The Grove was acquired through a combined land donation from the John D. and Catherine T. MacArthur Foundation and land purchase supported in part by a grant from the Illinois Department of Natural Resources and a $400,000 donation commitment from the Grove Heritage Association.

In the years since, the park district has made several significant improvements to enhance The Grove’s ability to tell the story of its human and natural history. Today, The Grove welcomes over 200,000 visitors annually.

Due to the historic nature of The Grove buildings and ecological significance of its natural areas, the Glenview Park District has adopted a specific policy governing still and video photography at The Grove. In some cases, permits are required and fees must be paid. For detailed information on these guidelines, click here.

The Grove’s staff and volunteers are passionate care givers to all of our critter friends, striving to make each animal comfortable and healthy. The long, healthy life-span of the animals at The Grove is a testament to the great work our team is doing.

What can you find at the grove?

The Grove Interpretive Center is a first-class nature center that is home to a collection of live birds, turtles, snakes, and fish as well as specimens for educational purposes, environmental exhibits, and historical resources.

The Grove Blacksmith Shop is a timber frame building with a cut stone floor located near the Interpretive Center, and is a functioning shop that displays period woodworking, tinsmith, and stone carving tools.

The Grove Program Barn is used for visitors and special programs. This multifunctional building provides a large space for recreational and educational programs and special events.

As you follow the trail from the Interpretive Center, a Log Cabin and a Native American Village, including a bark Longhouse and Teepee, recreate the scene of an early Illinois settlement.

The Grove Schoolhouse is a one-room replica of the original schoolhouse that was designed by Dr. John Kennicott and once stood on Milwaukee Ave.

In 1856, Dr. John Kennicott built this notable Gothic Revival house. Both the interior and exterior of the house has been fully restored with careful attention paid to each historical detail. Many original relics from the Kennicott Family are on display.

Nestled inside The Grove, a National Historic Landmark, The Redfield Estate is an ideal special event and wedding venue that meticulously marries history with nature.

Enjoy the private use of our vintage 1930s-era home, pavilion, and gazebo surrounded by the beautiful grounds of the nature preserve.

This stunning location offers more than 150 acres of forest, ponds, vast lawns, elegantly landscaped gardens, fountains and urns filled with seasonal flowers. Redfield Estate provides the perfect backdrop for your outdoor ceremony, reception, or intimate events inside the house, which features original leaded glass windows, a fireplace, and charming dressing rooms to prepare for your event.

Perfect for two to 102 guests, your event will be on you remember as you dine and dance on our gorgeous 30′ x 60′ outdoor-covered, stone pavilion. Evening lighting includes strings of bistro lights and lamp-lit serene walkways.

More about the Redfield Estate 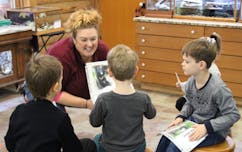 The Grove depends on volunteers in order to operate successfully! Whether you volunteer as a docent, as staff at special events, or to restore the natural area, there are opportunities that fit any interest.

To apply, complete an online application. For more information, contact the volunteer coordinator at 847 299 6096. 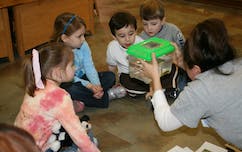 Support our animals by becoming a “buddy” to a box turtle, bullfrog, bluegill and more!

When you become a buddy, your sponsorship includes: 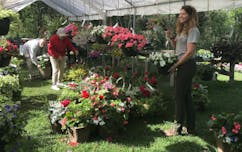 The Grove Heritage Association is a citizen support group that has played an integral part in the preservation and development of the property for over 30 years.

Birthday parties at The Grove

Celebrate your child’s adventurous spirit with a Pioneer or nature-inspired birthday party.